Walter and the Blue Connection – Get up and Go (wrafmusic)  In the past Dutchman Walter Hopmans played with several bands, mostly as a sideman in Finland. In 1995 he started to write his own songs. Together with his Finnish (musical) friend he developed the idea to record these songs in a studio environment. The result was there in 2005, a beautiful CD called “Get Up and Go” The cd is a mix of singer-songwriters music, Americana, pop, blues, rock and folk. Themes like empty love, worries, hope and sentiment are dealt with against the backdrop of a Finnish society. 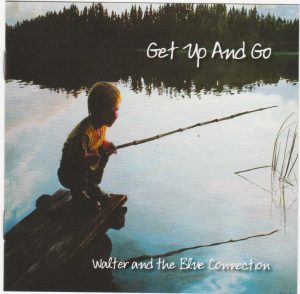 This is a cd you can’t ignore. The cd has been released successfully in Finland during a promo tour in October 2006. During February 2007 the band did a big promotional tour through Holland.

Summary: A self produced cd filled with a mix of singer-songwriter music, blues, pop, rock, and folk. A Finnish rootsband with a Dutch core. Walter Hopmans (vocals, acoustic guitar, harp) made from his own repertoire, together with Anssi Lehtivuori drums, Pete Bergman bass, crying guitar and Pasi Saharinen electric guitar, Dobro en slide guitar, a very varied cd. Themes like empty love, worries, hope and sentiment are dealt with against the backdrop of a Finnish society. All this with passion and conviction. Strong songs with a mix of different styles. It’s a record that grows on you, a record that only wants to give away all its secrets after a repeated listening.